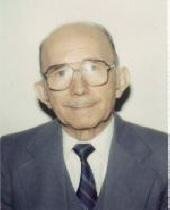 SPASIS ( Papadimitrou ) , Spiro Born October 14, 1922 and passed away on June 12, 2008. A formal notice of Spiro's life will be published in Saturday June 21, 2008 edition. Arrangements entrusted to the Windsor Chapel Funeral Home 1700 Tecumseh Rd East ( 519-253-7234 ). SPASIS (Papadimitriou) Spiro It is with profound grief and sorrow that family and friends mourn the passing of a wonderful and great gentleman, whose presence and personality to all he knew was bigger than life itself. Once you had met and experienced this special man, you could never forget him. An average existence would never meet his high standards and expectations. Being best in the realm of life, as a son, husband, soldier, family man, and businessman, would reflect the meaning of success to Spiro. He was courageous and strong, and he fearlessly battled life's obstacles. He met his challenges head-on, with a matter of fact attitude. He felt there was nothing that he could not do or defeat. Intelligence and wisdom were abilities that guided his decisions. He saved all of his emotion for his family, who he would wrap in a blanket of protection, so softly and sweetly, and cover gently with love and every comfort. Spiro was magical, intriguing, and extraordinary, and we thought that he would live forever. HIS PASSING TOOK OUR BREATH AWAY. Spiro was born in Kastoria, Greece to parents, Very Reverend Dimitri and Petra Papadimitriiou, in the village of Vishinija. He was orphaned at an early age, and was unofficially adopted by fellow villagers, specifically, the family of Spiro and Anastasia Panchos. It was in this family that he would meet and fall in love with the love of his life, his future wife and soulmate, Afradity Panchos. They were married on May 16, 1943. It was the most significant and poignant union of his life. During WWll in Greece, Spiro proudly served and fought as a soldier for his country and culture, in Allied troops, in the Resistance Army, for the preservation of democracy, peace, and freedom, not only in Greece, but worldwide. He felt a strong conviction to these notions to the very end of his life. Life in Canada began in 1950, with visions and seeds of entrepreneurship sown and nurtured. By 1953, the first business venture was born, "Delmar Meat Market", in downtown Windsor. He and his wonderful partner, Mr. Tommy Lambros enthusiastically established a reputable presence in the service industry. In 1962, Spiro became the owner of the "Rose Bowl Restaurant". Together, he and Mr. Archie Rose (then owner of Bowling Centre) worked side by side tirelessly, yet joyously to root a strong foundation in Windsor's bowling industry. Dad worked 7 days a week, 15 hours per day for 364 days a year, and loved every minute. A third person, Mr. Moe Parent completed the trio. In 1974, Spiro brought his knowledge and expertise to yet another Bowling Centre. "The Golden Mile", in East Windsor, where he owned and operated the restaurant there. In 1983, although remaining in the service industry, Spiro returned to his roots in downtown Windsor, and opened the "Market Caf"" , a caf" located in the original City of Windsor Farmer's Market. And then finally, at the age of 81, he returned once again to the bowling industry, and completed his career in business at the Super Bowl Bowling Centre from 1999-2004. He continued to act as a teacher passing on guidance based on his strong work ethic and business etiquette, to his family at the Super Bowl Grill and Snack Bar. Along the way, and in all of his business ventures, Spiro insisted on being a hands on owner and operator. He knew his customers and took great pleasure in serving them well. Attention to detail and presentation of food and beverages he provided were distinctively his own creations. Selection of food was always fresh and prepared upon order. Bountiful and affordable was his motto. He was strict about his preparedness for work everyday. Similarily, a smile, a laugh, and friendliness meant something. He doted on his customers, as they on him. They affectionately nicknamed him, "Pete". He was well known amongst all walks of Windsorites; young and old, rich and poor, all levels of education and all faiths, creed and color, with one thread of continuity and commonality, the very essence of being human. What a gift he gave to us, his surviving children: Richard "his Buddy", Petra and Gary Lee, Athena and Fred Tiller, and grandson James Tiller. We Thank-You Dad, for being you. We miss you terribly. We will treasure our memories with you. We know that you are finally re-united with Mom, (Sept. 17, 2006). It was a tough past 5 years Dad, especially the last 1.5 years without Mom. Little did few people only, know how you postponed your own cancer treatment, living on a prayer to make this private, personal, sacrifice to spend the last days of Mom's life being strong for her. We are eternally indebted to both you and Mom. Rest in peace, together once again, in comfort and in love. May God Bless You Both. Mr. Spasis' arrangements were proudly undertaken by the staff of WINDSOR CHAPEL FUNERAL HOME, 1700 Tecumseh Rd., East. Online condolences and shared memories may be submitted at www.windsorchapel.com
Print