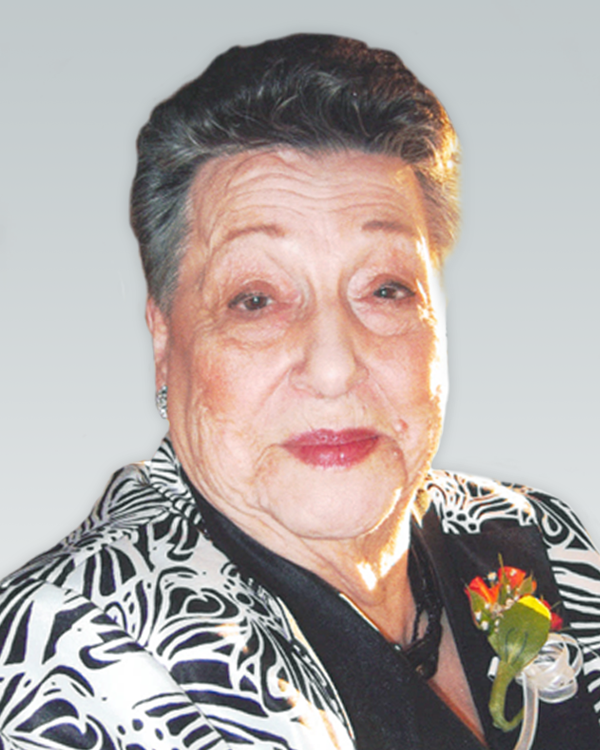 Services will held on Friday September 9th, 2022. We will meet at 1 pm at Windsor Chapel (Banwell Chapel) 11677 Tecumseh Rd. East Windsor, Ontario, in order for us to proceed together to the cemetery (Victoria Memorial Gardens-Highway #3), where we will have a short ceremony. Following the service, we will host a dinner. If you are able to attend the dinner, please r.s.v.p. Angelo D’Amico at angedami@cogeco.ca so that we can provide numbers to the restaurant. Online condolences and memories may be shared with the family at www.windsorchapel.com

September 13, 1923-August 31 2022, the dash connecting her birth to her death represents so much to our family. Between that dash was a life lived.  Our mother would regale us with stories of growing up with 7 brothers and sisters. A devoutly Catholic family, our mother was a rule follower and team player. Her story was one of ‘riches to rags’. Her grandfather, Jules Robinet, immigrated from France and started a brick company, and the first wine company in the Sandwich/Windsor area. By all standards, he was a wealthy man. However family drama, and the great depression, changed that and after her father lost his wine business, she ended up helping to financially support her parents.

She met our father, Charles Alfred Reid, 1920-1971, after he returned from WW11 where he was a bomber pilot. They lived across from each other on McKay Ave., in Windsor On, and she always told us that seeing him in his uniform was appealing, but their ballroom dancing sealed the deal. They complimented each other in many ways; he was charismatic and a risk taker, she was modest and cautious.

Some of the fondest family memories of our childhood were when we were entertaining family and friends at our home, and our mother could really put on a spread. Her baking was legendary but no matter how many compliments she got, her answer was always ‘well it’s not as good as I usually make’.  We also loved shopping in Detroit and smuggling our treasures home. There were many a tense moment as my mother, unable to lie, sat in the car wringing her hands as lied about our purchases. And our parents also loved playing cards. Our mother was so happy when we would all play Penny Ante poker. Oh and the casino; when the Alzheimer’s affected her social engagement, we could always get her out if we took her to the casino. Not sure what it was about the place, but we had many a late night at the black table with our 90+ year old mother.

Women of her generation lived within the rules of patriarchy. She would get an allowance from our father to run the household, and she often went without to meet our needs. One of her proudest accomplishments was getting her driver’s license. It’s hard to imagine but many of her women friends were dependent on their spouses to drive them around.

She had secrets too, and it wasn’t until we were adults that we learned of some of them. It was like finding puzzle pieces that helped us to see the full picture of her life, and knowing those secrets made us admire her even more. As much as she was conditioned to be dependent, she was gritty.

She went through some very difficult times, but none more difficult than when her best friend, Kay Reid, died and shortly thereafter her husband was diagnosed with cancer and passed six months later. After that she struggled to support us while also dealing with her grief. Her siblings rallied around her and she moved into a stage of her life that she fiercely protected, that being her independence.  She was a proud woman who lived modestly but was charitable and generous with her gifts. She was very proud of her children. Her eldest son a chiropractor, her middle daughter a neo natal nurse, and her youngest a social worker.  And she was thrilled to be a grandmother to 8 grandchildren, and 9 great grandchildren.

Later in life she developed Alzheimer’s, and when she could no longer safely live independently, her daughter Pat (A.J) built an apartment onto their home and moved her in. She was there for another 12 years, slowly living her life in reverse until she was in infancy and completely dependant.  The care she received from her daughter Pat, son in law A.J., grandchildren Katie and Matt is legendary. She helped raise Matt and Katie, so they were deeply devoted to her. In her final years, soothing her and helping her not to suffer was of the utmost importance. Although her last days of life were heartbreaking, every possible effort was made to keep her comfortable. She passed at 5 am on August 31, 2022 in her home, with us holding her hand and willing her to a better place.

Her children and grandchildren were everything to her and as we said goodbye, memories of how she loved and cared for us were expressed by all. It is a complicated grief for our family as we have been losing her slowly over the years. We are deeply saddened by her loss, but grateful she is no longer suffering. We hope she has reunited with her family and friends, and that she’s winning big in their poker game.