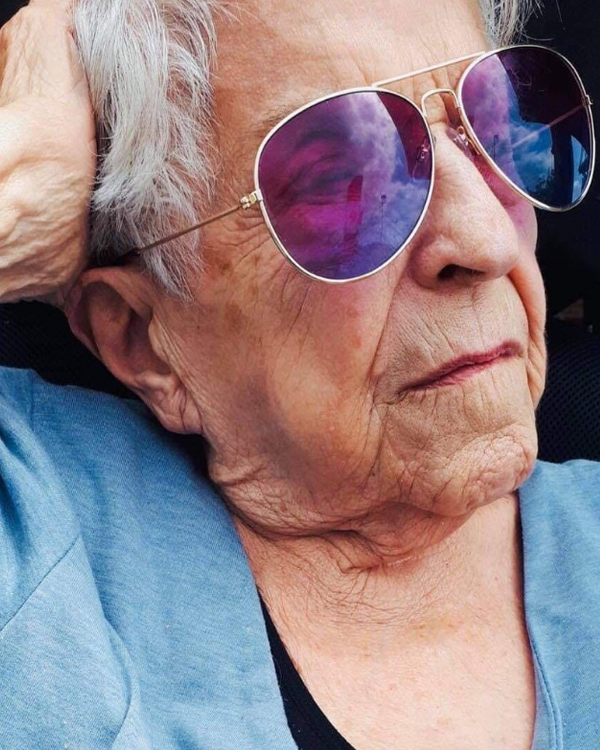 Her greatest joy in life was to be in the company of the people she loved and since she loved people she was often found sitting with others even if she did not know them. In the last few years of her life, she loved holding hands, cuddling, giving, and receiving hand/foot massages, spooning, soul gazing (staring deeply into the eyes of others), and trips away from the nursing home.

For decades, her home was a gathering place that was filled with laughter AND passionate debates and the occasional heated argument around the card table. She loved her weekly bridge club and would never say no to a card game. When we were young, she would create a winter wonderland in our backyard complete with an ice rink and a kinda sorta dangerous ice slide onto the rink. Summers were for camping adventures, swimming, sunny days at the beach and boating with extended family.

Her greatest strength was that she really “showed up” for her kids and her community. If you needed her, she was there – often times without having to be asked. She supported and loved even when it was hard for her to do so. She showed up when we needed her and was tuned into our needs throughout our lives to make sure we always knew and felt her love and support.

Aline was not afraid of anyone and never held back from expressing her thoughts and feelings. She was fair and practical and filled with determination, passion, compassion, generosity, and a healthy dose of creativity and humour. She encouraged her children to develop our own opinions and values even when they differed from hers.

Anyone and everyone were welcome for dinner. She even took in a few of our friends for extended stays. She just wanted everyone to feel like they had a place in the world and if they did not, she helped them to find one. She was a problem solver and a critical thinker that could see cracks in our social fabric and would either join an existing group or create her own to rectify the issue at hand.

Aline played an enormous role in our community. She was a founding member of the Bilingual Legal Aid Clinic and Place Concorde, a past president and active board member of ACFO, and played a leadership/activist role in extending TVFO programing to Southwestern Ontario. Aline was an active member of the PTA and officially represented French interests on the Windsor-Essex Catholic School Board. One of her key accomplishments was the opening of l’ècole secondaire l’Essor which occurred on the same day her youngest was entering into high school. Aline worked on political campaigns, and a frequent guest and advocate for Radio Canada. She won numerous awards including Femme de l’annèe du Sud Ouest, and the governor general award from the University of Windsor.

Our mom was born in Montreal and grew up in St-Thérèse QC. In 1947 she completed a Master of Social Work degree from University of Montreal. She worked at a Family Services Agency in Montreal until 1951 when she accepted a position with the Cornwall Children’s Aid Society. It was in Cornwall that she met, fell in love, and married our father, Ray Harrison. Before the birth of their first son, Ray and Aline moved to Windsor where most of Aline’s family had resettled from QC. Our mother stayed home with her children and her own mother until the latter’s passing in 1975 when she returned to working outside the home. She worked briefly for her husband, then transitioned to journalism with Le Rempart, where among other things she co-created a column entitled “on parle d’eux” with her then pre-adolescent daughter. Aline eventually returned to social work by accepting a position with the Windsor-Essex Catholic Children’s Aid Society and later retired from her position as a school social worker with the Windsor-Essex Catholic School Board.

Our family would like to thank Aline’s special friends: Taryn Duffy, Jacqueline Hopkins, Gisèle Kerry, Judith Sinanga and Sue Carr. We are also grateful for the PSWs and RPNs that called her mama and treated her as such.

Family and friends are invited to visitation at WINDSOR CHAPEL (Banwell Chapel) 11677 Tecumseh Rd. E 519-253-7234 on Saturday, June 18, 2022, from 11:30am until the time of her funeral service at 1:30pm. Burial to follow at Heavenly Rest Cemetery. In lieu of flowers a donation to “Services communautaires du sud-ouest” would be appreciated by Aline’s family. Condolences and memories may be shared on her Tribute Wall at www.windsorchapel.co