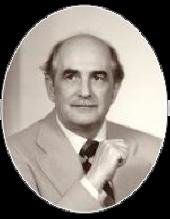 MARTIN, John "Jack" Passed away on February 15, 2008 at Oakwood Hospital, Dearborn, MI at the age of 86 years. Reunited with his late wife Audrey (1977). Loving father of Sharon Conliffe, Christine Aytoun and husband Rick. Cherished Grandfather of Jacqueline and Christopher Conliffe, Jessica Aytoun and fianc" Benjamin and Matthew Aytoun. Dear brother of Shirley Oleynik, Joyce Denonville, and Joanne Balogh. Also survived by many nieces and nephews. Jack was a member of the Board of Governors at the University of Windsor, serving 2 years as Chairman of the Board of Governors. He served many years on the Board of Regents at Assumption University. He was President of Marwick Property Management and was involved in zoning properties in the City of Windsor. He was a Graduate of the University of Michigan in Civil Engineering and a longtime resident of Windsor. Visitation at the WINDSOR CHAPEL FUNERAL HOME, 1700 Tecumseh Rd. E. on Sunday, February 17, 2008 from 7-9 p.m. Monday from 2-5 and 7-9 p.m. Parish Prayers Monday at 7:30 p.m. Relatives and friends will be received for visitation on Tuesday, February 19, 2008 at St. Rose of Lima Church (891 St. Rose Ave.) from 10 a.m. until time of Funeral Mass at 10:30 a.m. Interment to follow at Heavenly Rest Cemetery. As an expression of sympathy, donations may be made to the Windsor Essex Cardiac Wellness Centre. Online condolences and cherished memories may be shared with the family at www.windsorchapel.com
Print