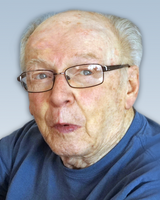 Passed away peacefully with his daughters at his side. Beloved husband of over 63 years of the late June (2017). Cherished father of Barbara and son-in-law Pierre Meunier of Ottawa, and Nancy of Windsor. Eldest son of the late Charles and Mary Ursel of Winnipeg. Caring eldest brother of Doreen McMaster (the late Arden), Kenneth Ursel (Gail) and Arleen Skinner (Lyle), of Winnipeg, Audrey Belanger (Andre) of Victoria and the late Lorraine Barclay. Chuck also leaves many nieces and nephews. Chuck was proud of his 41plus year career at Air Canada, in both Winnipeg and Montreal. He retired with the position of Avionics instructor, having travelled widely to give courses in Jamaica, Cuba, and many other locations. Chuck was an active and involved resident of all the communities in which he resided, but his greatest joy was spending time with his family (both 2 and 4 legged). Special thanks to Dr. Aoun as well as Dr. Zakaria, and in the ER, Dr. Meriano and nurse Stephanie. Also, the fantastic nurses of the 7th floor of Windsor Regional Hospital Ouellette Campus, including Cheri, Justin, Lisa, Khristy, Tha, Carmelle, Sabrina, Brittany, Gian, Jordan and the wonderful physiotherapists, and many others. Also, thanks to family Doctor Brian Nhan for giving such good care to Chuck for many years. Arrangements entrusted to Windsor Chapel (South Chapel) 3048 Dougall Ave. 519-253-7234. Cremation has taken place. On line condolences and cherished memories may be shared with the family at www.windsorchapel.com. If you wish, please make a donation to a charity of your choice in lieu of flowers.