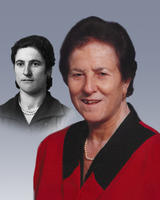 Felicia was known for her selflessness towards others, especially towards her nieces, nephews and grandchildren whom she adored deeply. Her strength,kindness and generosity will be deeply missed by anyone who knew her. The family of Felicia would like to thank the staff at Brouillette Manor for their many years of outstanding compassion and care shown towards Felicia.

Visitation to take place at WINDSOR CHAPEL (Banwell Chapel) 11677 Tecumseh Rd E. on Wednesday June 22nd from 3-5pm and 7-9pm. Prayers at 4:30pm. Services to begin Thursday June 23rd at 10:30am in the chapel, and then procession to St. Anne’s Parish (12233 Tecumseh Rd E) for funeral mass at 11am. Entombment to follow at Heavenly Rest (5005 Howard Ave). In memory of Felicia donations are appreciated to Transition to Betterness (T2B). Online condolences and cherished memories may be found at www.windsorchapel.com.