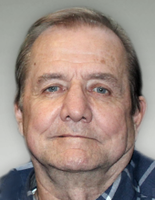 Passed away in his 75th year with his loving family by his side after a long battle with cancer on April 3, 2021.

Ralph will also be missed by many nieces, nephews, and friends.

Ralph was born and raised in Scarborough, Ontario to the late Donald and May (nee Pellow) Bastedo. He joined the Navy in 1965, serving as weapons underwater until 1969. Ralph and Deborah met in 1968 and married in 1969 and went on to have two children while he worked in the tool and die trade in St. Thomas, Sarnia and Windsor. He worked his way up from machinist to account manager, finishing his career at Select Tool in Windsor, where he retired at the age of 69. Becoming bored at home, Ralph went to work part-time at Wal-Mart, where he worked until February of this year when his health failed too badly to allow him to continue.

Throughout his life, as a hobby, he loved to fish. On a boat, on land, or even in the Detroit River across from their apartment, where he taught his grandsons to love fishing as well. We know he is fishing now.

Ralph was also an avid collector and seller of antiques, with an emphasis on collectible toys. He also spent many years in 5-pin bowling in St. Thomas, and made a trip to British Columbia in May of 1979 with the Ontario men's national team for the then-named Carling O'Keefe Open tournament, which they won.

Cremation will be taking place, with a celebration of life to be held at a yet to be determined date.

Please consider a donation in Ralph’s name to the Hospice of Windsor.

A heartfelt thank you to all of the staff at Hospice who took such good care of our husband/dad in his final days.

"Your wings were ready, but our hearts were not" ♡♡♡