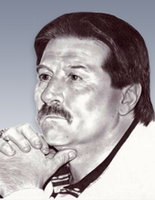 Richard retired from Chrysler Canada after 34 years. He was a dedicated member of Local 444 Union since the early 1970’s and served as the Vice President, prior to his retirement. He treasured the relationships he made with his Union “brothers and sisters” and will be deeply missed by all of them.

Richard enjoyed bowling, playing baseball, golfing, betting at horse races, and going on camping trips with Christine and their daughters. He spent his retirement watching his grandchildren’s extracurricular activities. He was always in the crowd cheering and was their biggest fan. In his last few years, you could always find him and his brother Kenny outside, hunting or fishing all year round.

He never missed a Friday morning breakfast date with Tawnya and Anthony, and loved to garden with Lisa and Dan. The fur babies will miss all the treats he used to feed them.

Arrangements entrusted to WINDSOR CHAPEL (Banwell Chapel) 11677 Tecumseh Rd. E., 519-253-7234. In keeping with Richards wishes, a private family viewing will take place with cremation to follow. He will be laid to rest next to Christine at Victoria Memorial Gardens. Online condolences and cherished memories are encouraged by the family at www.windsorchapel.com